The beginning of every race is the same – people take their places in the pack where they think they will excel, the goal is set: finish the race. The runners hear the gun blast or the whistle blow, and they’re off! According to runningusa.org, since 1990, there has been more than a 140% increase in U.S. marathon finishers (224,000 vs. 541,000) and over the past decade, a 40% increase (386,000 vs. 541,000). But when it comes to New Year’s Resolutions, only about 45% of Americans set resolutions and popular research demonstrates that only about 8% of those people actual reach their goals. In fact, 1 out of 3 people drop their resolution before January even ends. That begs the question: Why is it that people who sign up to run a marathon and complete it are increasing in number while those that set New Year’s Resolutions, which are often much less taxing on us physically than a marathon, drop them like hotcakes often before the year really even gets started?

There are many things that make completing a marathon a much more likely prospect than a New Year’s resolution. I realize that this sounds ludicrous, but I promise you, it will make more sense as you read along.

2. Training for a marathon is achieved through tangible, motivating smaller goals.

Once you sign up for the race, you don’t sit around until race day and then burst out to run 26.2 miles and expect to complete it. You start a training regimen that is designed with smaller goals in mind. These shorter-term goals (i.e. increasing your run by 1 mile per week) keep you motivated to continue on. Instead of starting 2016 thinking, “I just need to lose 25lbs”, think in terms of a longer-term goal of 25lbs, but smaller, tangible goals of 2-5lbs per month. I know, I know, it can be painful to think of setting a goal of 2-5lbs per month, who does that? People who meet their goals, that’s who!

3. Completing a marathon involves signing up for it first.

People who write down their goals (i.e. signing up for that marathon) are 42% more likely to achieve their goal than those who do not write it down (Matthews, G, 2011). New Year’s Resolutions are often stated declarations. If you want to have a higher likelihood of reaching that goal, go ahead and write it down.

Another problem with New Year’s Resolutions is that they often come in pairs or even more. People say, “This will be the year, I’ll lose weight and be more on time!” or “This year, I’m going to exercise more, quit smoking and save more money”. Focus people!! Why must we group everything together?? Pick 1 resolution and focus on that. And, remember to refer back to #1 “The end goal is clear” to write that 1 goal.

5. People often rally social support when they set out to complete a marathon.

You should too! Whether its joining a track club for training purposes or enlisting friends and relatives to come out and cheer them on, completing a marathon often involves an emotional support team. For as much as there is research siding with not announcing your goals for the sake of preserving your motivation (Mahler, 1933; Gollwitzer, 1982), social support often helps a person remain accountable, feel emotionally cared for and less isolated when they set a goal. If you’ve ever known a person who quit drinking, the first thing often suggested to them is to get support through AA and other like-minded individuals. The primary purpose is to find a social support group that understands what you’re going through and can support you emotionally when you need it.

So, what will it be for you this year? A marathon? Or a clearly defined resolution, broken down into smaller steps, written down and supported by friends? I know which one I’ll take. 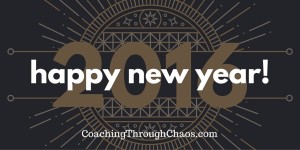 Emotional and other Repackaging
July 13, 2020

7 Proven Success Habits for Improving Your Life
May 3, 2016