Anxiety is a physiological reaction to stressors in our environment.
Certain stressors or traumas can result in an anxiety- based condition in a person who may have other factors influencing the occurrence, such as family genetics or consistent environmental stressors.
Anxiety can manifest itself in many ways (see what does anxiety feel like?).
Research has demonstrated that severe or long-lasting stress can change the way nerve cells in the brain transmit information from one region of the brain to another, triggering one of several “anxiety disorders”. People with certain anxiety disorders such as Post Traumatic Stress Disorder may suffer changes in certain brain structures that control memories linked with strong emotions.
Anxiety disorders can run in families, which means that a person can inherit it from either one or both parents. 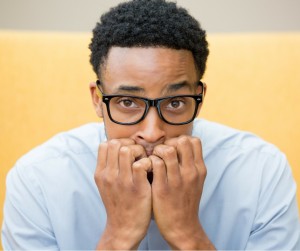 Anxiety can manifest itself differently depending on the condition.

According to the Anxiety and Depression Association of America (ADAA):

What is the treatment for anxiety?

Treatment fort anxiety ranges from traditional psychotherapy (talk therapy), behavior therapy, medications, or a combination thereof. Certain anxiety disorders can have quick responses to therapy, while others may be more difficult to treat. Panic attacks can be treated with behavioral interventions interspersed with talk therapy. If you think you may be dealing with OCD or Hoarding Disorder, please seek out a therapist who has special training in treating these disorders.