Emotional and other Repackaging 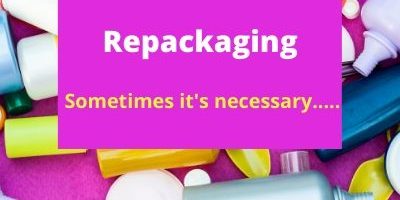 We start in one place.

Repackaging. It’s a word I think of often. We repackage products when necessary, and sometimes we even repackage ourselves.  I think of this as emotional repackaging.   I know when I have reflected on my life, I think of times when I had to adopt a way of being on the outside, that didn’t actually match how I felt about myself on the inside.  I essentially donned new packaging without having yet revamped the inside product. What I found was that what may seem artificial -just wearing a new outside package, I was able to actualize what the packaging was selling on the inside.    Just so we are clear on what I mean, I’ll give an example from my own life.  When I moved to California 20 years ago, without knowing anybody, to begin graduate school to pursue this career I dreamed of, I had to make a drastic change in how I viewed myself in order to make any friends. I had previously been quiet and shy.  (There were other things going n in my 20s that I mention in my book)  I longed for more social connection, but I wasn’t really good at connecting with people in a way that allowed me to make new friends in my 20s.  The friends I had in NY then (and now) were the friends I had from childhood & my first year of college. I was now leaving NY at 30 for California.  I met people and would have boyfriends, but I did not make any long-lasting friends due to my own lack of social abilities in insecurities.  So, when I decided to move to California, I knew that I was going to live a very lonely life if I didn’t put myself out in a more friendly and accessible way and figure out how to overcome my social anxiety. Was it easy, absolutely not, but my life would be forever less rich if I had not put myself through that and formed the connections I did. Today, the friends I acquired over the last 20 years would hardly believe that I was ever shy.  That repackaging on the outside as a “social” person changed me forever on the inside.  I do tell a bit more of my life stories and hint at some of my other repackaging in the first chapter of my book.

My journey did lead me to this amazing career where I get the privilege of witnessing my clients repackage themselves as they need to as part of their process of change. There are lots of ways to get to an emotional shift in life circumstances, but I think repackaging is one of the most efficient. That being said, it’s also one of the most emotionally challenging. As I mentioned, this way of effecting change comes through putting on an outside shell that says “I am who I say I am right now” – maybe it’s more confident, maybe it’s outgoing, healthy, approachable, calm, when really you feel self-conscious, shy, unhealthy, unapproachable and anxious.  Impostor syndrome is usually the most predominant saboteur to show up, but anxiety and self-doubt show up and hang around to torture you too. It sounds crazy-making and it can feel that way, but as you put on that new packaging every day, adopting the persona that comes with that packaging, you are actually training your brain that you are what you are putting out there. And really, YOU ARE THAT PERSON you are trying to be! No one else is doing it, and others don’t know how you feel inside. Just like my story of adopting a more social and outgoing packaging…..No one in California knew I struggled with being shy and lacking confidence to talk to new people. They just knew what I gave them of myself.  I was the only one that knew I wasn’t quite there emotionally. However, after a few months of putting myself “out there” in those ways, I just started being it (more social), rather than just doing it.  Transformation is such a popular term right now.  If you go on Instagram, there are thousands of “transformation” pages.  They end up with huge followings, often because the audience gets captivated by how the person’s life has changed for the positive when they have accomplished their goal. They want to learn “What’s the magic formula?” and “Where can I get some of that?” Well, repackaging is one of the most efficient ways to get an emotional transformation.

Some people reading this might question if one can truly be authentic while wearing packaging on the outside that doesn’t quite fit on the inside. Definitely! You are still being you – in fact, I would argue that you are even more authentically you because you are finally being how you want to be in the world.  Yes, you are struggling to do it, but it is YOU who is doing the work every day. That work to put ton that packaging, until that day when you no longer need it and you are just you, as you authentically are.

Repackaging what we create – with intention.

My last story for this blog post on repackaging is another personal one. I mentioned in the opening of this post that, of course, sometimes the other things that get repackaged are products that we put out in the world. Well, that’s what I did this week. Last year I wrote a book to help women become better leaders.  Whether it was to be a better leader in their career, or in their personal life, my intention was to empower them to live congruently with how they wanted to be in the world.   When I wrote this book, I was working towards a deadline that coincided with a cool opportunity to speak at a large conference. When it came to naming the book, I ultimately messed up. Contrary to going with my gut and selecting a title that I thought would go with the book, I sort of let Google guide me on the title choice. It’s very trendy these days to have a catchy title, even one a little aggressive, to catch a reader’s eye. “You are a badass” and “F**k  Feelings” are well-known best sellers. I got sucked into the fear that the book wouldn’t catch anyone’s eye as just “The 60-Day Plan for Embracing Your Inner Leader”.  Instead, I decided on “Stop Bitching, Just Lead!” with the subtitle of “The 60-Day Plan for Embracing Your Inner Leader”.  That phrase. Stop bitching, Just Lead had a double-meaning to it for me. Yes, on the surface, it means stop complaining and move forward, but the meaning I was intending was to help women understand that great leading women do not traditionally “bitch” themselves up to be respected.  Great female leaders lead from a place of authenticity and skill, rather than a facade.   Unfortunately, having a title that needs explaining is usually not something that sells. Now, as I stated, my intention was to help reach more women and empower them with practical skills that I’ve been teaching my clients over the years. Selling the book to make some money is great too, but you can go ahead and just get it for free when you have Kindle Unlimited. So, giving my book a title I though t would get attention is not who I am, so it backfired on me.  Early after the launch, I shopped it around in groups of women on social media – they let me know how offensive the title was (I’m cringing as I write this as I’m just as uncomfortable with the thought of having offended women with my words now as I was then).  This dilemma led me to do minimal promotion and just sort of sit on it as just something that was out there on the internet that people might find. I decided that’s just not OK for me. I put a lot of work into it and the people who have given me feedback after reading it have really found it helpful. In fact, someone is thinking about getting it as part of a curriculum at a school for girls (of course, I think, “How could they possibly really adopt it with that title?”). I knew I needed to do something about this problem. I decided to repackage it. The title was only mentioned 1 time in the book, so the content isn’t actually affected by this change.  Now, whether it gets downloaded a lot or not, it is authentically out there in the way that is congruent with my intentions for it.  If you feel you’d like to check it out, you can find “The 60-Day Plan for Embracing Your Inner Leader”, a Coaching Through Chaos Workbook, right here.   Every time I do something to more authentically align my work and my writing with who I am, it comes back to me in so many positive ways.

More confidence, less anxiety, leaving behind fear of being judged, living congruent with your values – what packaging would you like to adopt to help you accelerate the change you are looking for?

You can download the book for free right here!(pdf)

The 60-Day Plan for Embracing Your Inner Leader

Or on Amazon Kindle Unlimited

Addiction Counseling on your laptop!
July 6, 2020