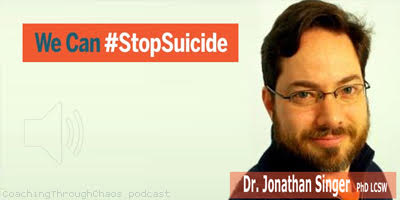 Dr. Jonathan Singer is a foremost expert on suicide prevention. He is also the host of the Social Work Podcast. It was a strange honor to do a live conversation with him to help process my experience of surviving my brother's suicide.

This episode covers so much. We discuss suicide prevention as well as the impact of surviving sibling suicide.

Suicide Prevention and the Grief of those Left Behind

I was personally devastated by suicide on July 1, 2007, when my youngest brother, Scott, took his own life at the age of 28.  Scott struggled for many years in and out of mental health treatment episodes.  He never quite let go of the perceived stigma of what it meant to have a mental illness, so he never fully accepted treatment.  Even if he had, we know some people still make the choice to end their life.  What they don't know, or can't know, is how the survivors they leave behind are profoundly affected.

I met today's guest, Dr. Jonathan Singer, LCSW at the Podcast Movement conference in Chicago last July.  Jonathan has been the host of The Social Work Podcast for over 9 years.  He started it as a way of bringing his university students extra information between lectures.  it has since taken on a long life of it's own.  There is not only a vast array of information  pertaining to all aspects of  the field of social work, but he also delivers inspirational interviews of people doing extraordinary things.

Jonathan's primary field of study is that of Suicide Prevention and Awareness.  He is the author of Dr. Singer is the author of 45 publications, including the 2015 book Suicide in Schools: A practitioner’s guide to multilevel prevention, assessment, intervention, and postvention .  He has given over 100 academic presentations around the country and is an expert in his field.

What's Happening in This Episode

The first half of the episode features:

- The ages of children most at risk for suicide

- How to discuss suicidal language with your child

- What to do when your child says things like, "I wish I were dead!"

- How to utilize professional help and when it should be considered

- The significance of the suicidal thoughts

The second half of the episode, Jonathan dives in with me to explore how I and my family were affected by my brother's suicide.  I am exploring this publicly hoping that it will help shed light on how complicated the grieving process can be for sibling suicide and other suicide loss in the family.  I'm also hoping that those who are survivors of a loved one's suicide feel less alone.  Grief is complicated even when we expect a death to take place (i.e. when an elderly parent passes away), but it becomes more complex when someone you love chooses to die by suicide.  My family's reaction is not unusual, but in general, we still do not speak about losing loved one's to suicide openly.  I'm hoping that by speaking about it in this forum, others may start their own conversations with their loved ones struggling with the suicidal thoughts, or amongst themselves if they are already grieving.

Thank you for listening to this very personal episode.

What #Not6 is all about