The Story of Cranky Carl and Passive-Aggressive Patty! 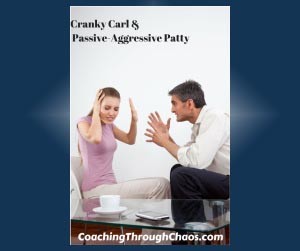 In the field of relationship psychology, we absolutely know that one partners’ behavior does affect how the partner interacts with them.  When one person in the relationship is perpetually negative, it can have dire consequences on said relationship.  Contemporary research in the field of relationship satisfaction has demonstrated that there are some key factors that play into negativity flourishing in a relationship.  When couples interact with defensiveness, contempt, criticism and “stonewalling” (Gottman) there is a very high correlation with relationship failure.  The dynamic often appears when one person has a negative approach to communication on a regular basis.

What Passive-Aggressive Behavior Does to a Relationship

In the beginning of this relationship, Cranky Carl played along to Supportive Sally’s requests for “date nights” and social gatherings with their friends because he was courting her.  Supportive Sally always knew that social outings weren’t her partner’s “thing” but she appreciated that he made the effort.  One they married, Cranky Carl began to change their relationship  dynamic.  He began refusing to attend the social gatherings and when Supportive sally would request a date night, he would complain and give her a hard time about the “need” for a date and about the choices of the restaurants.  At first, Supportive Sally tried to hear and heed her husband’s complaints, so they would only go out every few months, but over time, she stopped asking him.  The conversation that took place when Supportive Sally wanted to have a date night with Cranky Carl were so emotionally exhausting, she found it easier to stuff away her emotional needs and not ask, than to go through the turmoil just to have a date night! After about a year of this dynamic of Cranky Carl dismissing Supportive Sally’s needs, Supportive Sally went through “The Change” – she begins to think differently – not always so concerned about acquiescing to her husband’s complaints, but still not asserting herself – she morphs into Passive-Aggressive Patty!  Passive-Aggressive Patty is contemptuous and resentful.  She feels misled by Cranky Carl because he used to do things with her and now he won’t even try to play along with her.  Passive-Aggressive Patty now finds other people to go out with – sometimes she flaunts it in Cranky Carl’s face to try to get a reaction out of him, but more so than not, she just tells him, “I’ll be home late tonight. There’s stuff to make dinner in the fridge”.  Passive-Aggressive Patty starts to think maybe someone else would like to take her on a date and that Cranky Carl wouldn’t even care.

This dynamic is not uncommon when people are not clear with each other about their emotional needs.  Often when people get together, they are one their best behavior and do as these two did and played along for the sake of wooing and courting each other.  Most couples have differences in their likes and dislikes in their environments – these are not relationship killers.  The relationship killers appear when they stop expressing themselves appropriately and instead communicate through criticism, contempt, defensiveness and stonewalling.  In this example, Cranky Carl would complain and criticize Supportive Sally’s choices of date places or her friends as a way of getting out of having to go with her.  In turn, Supportive Sally began to feel resentment and contempt and her behavior was then fueled by her alter ego Passive-Aggressive Patty.  Once this dynamic takes hold, neither partner is getting their emotional needs met and the interaction becomes toxic.

If you recognize this in your relationship, feel free to contact me through coachingthroughchaos.com

Coping with Divorce – How to divorce and keep your sanity
July 12, 2015
Sharing