~ author of '100 Ways to Overcome Shyness', he is a multi-award-winning psychotherapist, syndicated columnist, author, and former NPR radio host, a keynote speaker and a top blogger for Psychology Today. He was named by Cosmopolitan as one of America's top therapists and honored by several professional associations. In this podcast, Dr.Barton tells you how to reclaim your life from shyness.

Buy it from Amazon 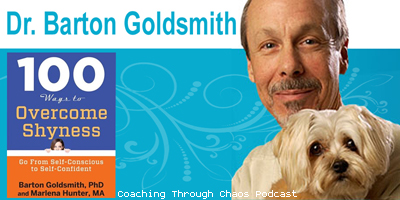 Today we are talking about tackling and overcoming shyness. I think most people can relate to being shy in at least certain situations. Some more so and more frequently than others, but I think we can all relate to that feeling of butterflies in our stomach when we think of doing something that instigates our professional or social fear factor. I know for me, as I relate in this episode, I was painfully shy as a child. This did carry over in to my early adult life, but I have tried to push past it over the years, and found tips and tricks like those Dr. Barton will share with us have really helped. He has authored several books, in this episode  we are talking about the latest in the new “Overcoming” series- specifically “100 Ways to Overcome Shyness”.

In this episode you'll hear:

This episode is full of practical tips!

If you enjoy this episode - please click the like button or better yet, leave us a review on iTunes, Soundcloud or through your preferred podcast listening service.

To connect with Dr. Barton Goldsmith through his website: BartonGoldsmith.com

You can find his books on his Amazon page:Dr Barton Goldsmith on Amazaon.com

Press the play button above to listen right here on this webpage, or avail yourself of any of the following additional options...
listen, comment and share via all your favorite apps...
iTunes | Tunein | Player.FM | Podbay.FM | Stitcher | YouTube

A lot of talk in recovery work deals with “building a positive (& sober) support network” and there is a concept called “re-joyment” – essentially it’s teaching addicts in recovery how to have a good time or recognize fun when they experience it.  When people have been addicted to substances, they are used to such dopamine overloads in their mind, that when life returns to “normal” and they don’t have such stimulation, it can sometimes be difficult for one to recognize a sense of what “joy” or “fun” feels like. When I have taught Drug & Alcohol Counseling courses, I used an example of the football game: Very often addicts/alcoholics were used to supporting their teams through  hours-long tailgating with lots of alcohol (which also increases the brains release of dopamine) & alcohol throughout the game.  When they are sober, they have to “re-learn” how to participate at a game & what exactly they are feeling.  People DO go to football games without drinking AND they may even tailgate without alcohol, but for the alcoholic in recovery, this is a new concept to them.  This is why the positive support network has been a positive part of recovery.

The article linked below provides new support for the positive supportive environment & it’s role in helping addicts stay clean.  It reminded me of the expression: “Happy Wife, Happy Life” :) Researchers found that when rats who were previously addicted to drug-infused water and isolative environments, they got addicted, but when they gave them the same water paired with other rats they could interact with, even after being “addicted”, they were ale to stop drinking the drug-infused water.  The article notes that in a preliminary study with combat veterans, when they were addicted overseas in combat, they could more easily leave the addiction behind when they were back home in happier environments.  The article posits that, like the rats who did better in more hospitable cage environments, we humans can design our cages (or support networks) in happier ways that could lead to more positive outcomes for a person’s recovery from addiction.

This post was inspired by someone dear to me who is trying to learn about their own venture into addiction and how to stay sober and I just want to publicly note how thrilled to know she is surviving and learning through her sobriety :)

This is a helpful read about the work of Maggie Perry at the Anxiety and Stress Disorder Institute of Maryland.

Here’s a great and easy explanation of how the brain can sabotage a skilled athlete’s performance.  Negative thoughts can be so powerful that they can cause physical reactions at critical moments of performance.  If you can relate to this, there are many techniques that you can practice off the field that can help you at those critical times.  Performance Anxiety can be overcome!  I’d be happy to speak with you about these such techniques and help you get you game on….consistently!

I often have to remind my clients that during their process of growth, they may be their only cheerleader because they are the ones invested in their change. If you are filled with self-doubt, your process will be more difficult.  We all have self-doubt – its just a matter of making the confident voice in your head the loudest one