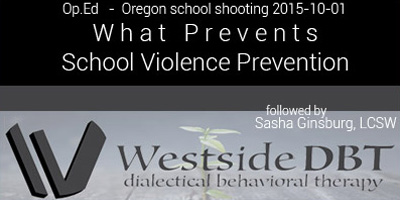 ~ is the executive director and founder of WestsideDBT in Los Angeles.  In this special Op.Ed episode Dr.Mullen discusses School Violence Prevention from the standpoint of research conducted, violence which could be prevented if individuals in need received appropriate treatment - for example, DBT is one method of therapy which could be applied to helping people with harmful-to-self or harmful-to-others ideations achieve a more resilient mindset. Sasha Ginsburg teaches us more about dialectical behavioral therapy and the programs they offer ...

Once a Week in the United States

We live in a society in which hearing about murders on school campuses 40 times this year is outrageous on one hand, and numbing on the other. Forty times just this year in the United States people – both kids and adults- went to their school campus to never return home. Those are numbers that are hard to comprehend. It is also campus shooting #142 just since December 2012 when the massacre at Sandy Hook Elementary School happened - that’s about 1 a week. Is this our new normal? Does it have to be so? That 142 does not take into account the numbers of shootings between 1999 when the first of the modern day campus massacres happened at Columbine. We, as a society can do things to stop this – Ill give a few insights as to that, but first I should put my knowledge of the subject in context for you.

I spent 3 years working as part of a development team of what we hoped to become a School Violence Prevention Institute here in San Diego. I became the historian of the project. I followed the stories and looked for what we knew of the shooters before and after they acted, the circumstances of the shooting and what the fallout was afterwards in the communities. For as much as there have been shootings on school campuses prior to Columbine, that tragedy in 1999 formed the new M.O. of what has continued since, so we studied all the shootings between 1999 and 2011 when we completed the book.

In all the cases in which the shooter was a current student we know 5 things:

1. There was concerning behavior that was not coordinated by school personnel (i.e a security guard did not tell a teacher of an incident and a teacher did not know a security guard also knew of a concerning incident, or a teacher and a school admin did not know they each had concerns about a student)
2. There were social media postings, writings or videos that spoke of killing or targeting specific groups of students.
3. There was easy access to guns.
4. There was suspicion of, or documented mental health concerns.
5. There was a history of bullying and/or social isolation.

We worked on and developed The School Violence Prevention Program as a book which school personnel could be trained on. We, as a team of clinicians and other interested parties conducted research and data collection. Our project lead, Dr. Jim Madero is an expert in workplace violence prevention so he had a lot of expertise in the area of violence prevention. We gathered the information and collective expertise and developed a community-based team approach to preventing school violence. Dr. Madero had the opportunity to present it at the Virginia Tech hearings where it got favorable feedback. Back here in San Diego, we shopped it around a few school districts and even did get it implemented in a district as a pilot trial. The problem was that, although many schools wanted it, they didn’t have funding for it. Why do they need funding? Why can’t we do this for free? There are trainings and meetings that need to be coordinated. Teachers and other school staff will need to leave their posts for the training, local law enforcement needs to attend (they are part of our prevent team plan) and experts need to train the staff on the protocol. Even in a world in which we could have them all gather and train them on a webinar, there are time and equipment costs involved in the production of the training material.

The team dream was to get legislation passed in which the state mandated schools to have violence prevention programs. That’s where it all fell apart. After an unsuccessful meeting with a legal adviser in LA and no legitimate supporters that could help back the implementation of the program, we have been at a standstill 2012. We are just one group of professionals out here in southern California – I would venture to guess there are dozens of teams around the country like us developing programs. We need a way to get these programs implemented and school personnel trained! If anyone is listening who may be able to help that come to fruition, you can email me DrMullen@Coachingthrughchaos.com and Ill put you in contact with our project manager to help us take action.

What can our society do to work towards School Violence Prevention?

We need reformation in several areas. The systems in the U.S. are broken – There are financial, communication and internal breakdowns.

1. Our mental health system broke in a way it has never recovered in 1993 when it was systematically unfunded and our long-term mental health facilities were forced to close. Those people still needed care and structure and our mental health system has been paying the price for that since then. Here we are 20 years later and it seems new funding gets put into street based program care for these people, leaving little room for the average high school student who’s depressed or feeling social isolated and ostracized because he’s been bullied. We need funding to help both the severely mentally ill and those that are falling through the cracks because they are not in “crisis”.

2. That leads us to our health insurance system – Although I personally like my health care coverage, I am not in need of what’s called a “higher level of care”. In regards to mental health services that means needing therapy more than once a week. Our system is set up to deny services to people unless they are already in crisis – We have a “treat the crisis, then step-down” system. We have lots of good Intensive Outpatient Programs in our communities, but I’ve witnessed more denials happen on the way up the system than on the way down. If a therapist or an MD refers a client for an Intensive Outpatient program, we need them to be practically on the verge of hospitalization in order to get the help they need. These programs usually meet a few hours a day, a few days a week. They are designed to provide a person struggling with emotional distress a place to come to talk about it, learn some valuable coping skills, and build social support through the camaraderie of the group structure. When a person has been hospitalized (the hospitalization criteria is that they need to be “in danger of hurting themselves or someone else”) they are much more easily approved for an Intensive Outpatient Program as a means of stepping-down in services. Why do we have a system designed to only treat when there is a crisis? Why would the insurance companies not look at what can be done to prevent the crisis from happening?
This is where I see that reform needs to take place in our health insurance system.

3. Then we have the educational system. Of course having a good, consistent curriculum will benefit our next generations, but first and foremost, they need to be safe. It is when people are safe that they can then settle in, focus and thrive. As I stated earlier, the way to get safety in place is to provide schools the ability to implement expert-designed safety programs in our schools that are community based so that there are very few pieces of the puzzles missed in the future.

4. The last system I will discuss and the one I think holds the most power is that of the media. I believe media can be our best friend and our worst enemy. In the event of major tragedies, the media can be quick to relay necessary information to help people comprehend what is happening. On the other hand, they can also give the recognition to these mass murderers that they so crave. Our mass murderers live on in infamy because our news media names them - and then picks over and publicizes every aspect of their life they can find. This needs to stop!

The Bystander Effect and How it Factors into our Societal Breakdown

Long before the days of the internet and social media, we have the story of Kitty Geneovese which is taught in every intro psych class in the country. In 1964, Kitty was murdered in the early morning as she returned home from work. She was stabbed to death in the street. The story was that upwards of 30 people either heard her or saw her. For as much as there were a couple of phone calls to the police, the majority of people did not take action (There is now debate over how many witnesses existed). This idea that many people can observe something troubling happening and not take action is called the Bystander Effect – We think someone else will call it in. Well, I want to put a challenge out to everyone reading this and say, “Don’t let someone else call it in”.
What Can You Do? Don’t Be a Bystander!
• Advocate to your insurance company when denials are rendered,
• Don’t watch the continued news coverage of the shooter,
• Talk to your school districts and universities and find out what their safety protocols are,
• Talk to your local and state level politicians- find out what they’re doing to get mandated school violence prevention programs in your schools.

What Progress Have We Made to Prevent School Violence through Legislation?

What About the “Gun Debate”?

I can’t write about preventing school shootings without acknowledging the highly emotionally-fueled gun debate. It’s everywhere. I’m not really ready to jump into the politics of this. What we know is that a great majority of these shooters gained easy access to guns in their own home. I have mixed emotions about gun restrictions. What I don’t have mixed emotions about is gun safety. My take on it is that if you choose to own a gun, no matter what the law in your state says you’re allowed to do as far as locking it up or not locking it up, it is your responsibility to make sure it does not get into someone else’s hands.

The Re-Cap: What We Need

We have systems that are failing us. We need prevention programs in place that are designed to protect our kids at school. We need school violence prevention programs in addition to “active shooter” protocols. We need media outlets to stop giving these mass murderers names and attention and we need a health care system designed to prevent mental health tragedies rather than treating the trauma that happens to our communities when they don’t. I personally hope we start seeing a movement towards positive change, resiliency and victory over these tragedies.