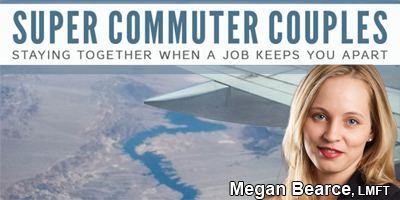 ~ author of 'Super Commuter Couples - Staying Together When a Job Keeps You Apart' , shares hints and tips from her book to help couples navigate the complexities of the Super Commuting lifestyle.

Buy it from amazon...

Do you know about the new trend in getting to work? It’s called super-commuting. Super-commuting is when a person lives in one metropolitan area and works in another specifically traveling 90miles or more to get to their job. Increasingly over the last few years, there are more and more people living this lifestyle. In the U.S., there are approximately 3.5 million super-commuters. The numbers are growing abroad too. It is estimated that there are 1.5 million people who work in the U.K. that live abroad.

For myself and my husband, well, we don’t like to have to commute more than 20 minutes to get to our jobs and we have been fortunate enough so far to design our work life around this desire for convenience. However, we live in San Diego and there is a lot of talk about commuters living in “bedroom communities”. These people choose to live farther away from their workplace as a trade out for having the perks of living in more affordable suburbs. It wasn’t until I was researching this episode that I realized I actually new a few super-commuters. It turns out at least 3 of my friends have either been a super-commuter or their spouse has. In one couple, the wife came to California for graduate school while the husband commuted every 2 weeks back and forth to their home state to continue his job until it was feasible to leave it. In another couple, the husband took part time work in another state, so he flew back and forth every other week to do that job while residing in another state with his wife and kids. The third couple’s entire 30+ years has been spent with the husband working part time in another country. I’m fascinated by how the person doing the super-commuting keeps their spirits up and manages their life in 2 places. I’m also respectful of the tolerance and teamwork it must take on both partners of a couple when one person is a super-commuter.

My guest today is Megan Bearce, LMFT. She is a therapist and also the wife of a super-commuter. She and her husband, Ian, found themselves resettling in Minneapolis after life got financially tough to maintain in Los Angeles. Soon after their move, they were faced with a decision to become a super-commuting couple. They had 2 young children at home and Ian was offered a job in New York City that forced them to examine how or why they would stay in Minneapolis and take the job in NYC at the same time. They decided to go for it!

At the time Megan wrote her book, “Super-Commuter Couples: Staying Together when a Job Keeps You Apart”, she and Ian had been maintaining their super-commuter couple life for over 2 years. Megan interviewed over 2 dozen super-commuter couples for her book from all over the world.

In addition to hearing just how long she, Ian and her kids have been a super-commuting family now, Megan tells us:

Super-Commuter Couples: Staying together when a job keeps you apart on Amazon.com link in our bookstore