Fire and Iron VS. TBI and PTSD 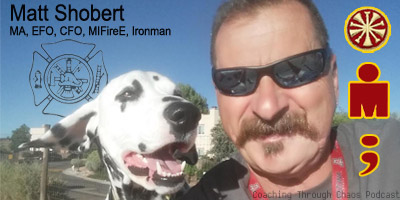 ~ Now retired Fire Chief and Ironman athlete, Matt Shobert shares with us the details of his near fatal accident on the line, and how his life changed due to TBI / PTSD. His story of survival, which he attributes in part to his physical fitness, will inspire you. His experiences with PTSD since the accident have motivated him to speak out and share his story to assist fellow firefighters across the nation who may be suffering in silence, but also to help remove the stigma of PTS(d) for all.

I thought I had a fair amount of initials after my name, but here’s Matt Shobert MA, EFO, CFO, MIFireE. Matt had been the Fire Chief for the Murrieta Fire Department (MFD) since March 2011, and has served as Fire Chief for two other jurisdictions prior to joining the MFD team. He holds a Master’s Degree in Organizational Management, a Bachelor’s Degree in Business Management and an Associate’s Degree in Fire Science. He is also a 2007 graduate of the National Fire Academy’s Executive Fire Officer (EFO) Program, has been four times accredited as a Chief Fire Officer Designee (CFOD) and was recently conferred Membership into the Institution of Fire Engineers (MIFireE). Chief Shobert completed the arduous 2.4 mile swim, 112 mile bike ride and 26.2 mile run - "140.6" Ironman Arizona in Tempe on 11/17/13. On top of that, he’s had a happy double-decade long marriage. He was living an exemplary life.

But everything changed on July 2, 2014. On that day, Chief Shobert was on a seemingly routine outing. He went out to a field to observe a brush clearing. Murrieta California is a hot, inland town and as any people are aware, brush fire prevention is a high priority in areas like this, especially in Southern California. The Chief was out by himself when the accident occurred. When you hear what happened to Chief Shobert, you can’t help but truly respect and appreciate his innate instincts to get himself help and his utter resiliency. The Chief shares the details of his accident for the first time publicly with me on the podcast. Please listen to hear Matt tell his story in his own words.

Matt went through several surgeries and still may be tasked with undergoing a few more. As you heard in the episode (if you didn’t listen yet, click here to do so), Matt is put together physically, but his emotional wounds are healing more slowly. The struggle is real. Matt is dealing with effects of both Post Traumatic Stress Disorder and Traumatic Brain Injury. He has done extensive emotional therapy under the care of a Licensed Behavioral Health Clinician since the accident.

He has gone through avoiding the area of the accident (which he was hard-pressed to do when he still lived in Murietta), nightmares, anxiety/panic attacks, angry outbursts, suicidal thoughts, slow thought processes and general lack of interest in leaving his home at times or going to places where there may be crowds of people. Though his emotional struggles are daunting, he is getting better each day. He has incorporated exercise, continues his talk therapy, calls on emotional support from his wife and others and credits his dog, Butters, for giving him some added support and love, as well as forcing him to get out of his home and walk him as a major part of his recovery.

Matt has recently begin to train to become an Ironman athletic trainer – to keep him fit and to get back into the athletic world he misses. He’s looking forward to training others to accomplish their triathlon goals. He also is focusing his life towards telling his story as he did on this episode. He wants to help others understand the reality of what it’s like to live with post traumatic stress, and also to allow those in the fire service who are dealing with it feel less stigmatized and to ask for help when they need it. Matt is dedicating his life to giving back and helping others. A true example of personal resilience and resolve and restoration of hope for his new future.

For more information on PTSD, please see our separate post on the subject here.

"Traumatic brain injury (TBI), a form of acquired brain injury, occurs when a sudden trauma causes damage to the brain. TBI can result when the head suddenly and violently hits an object, or when an object pierces the skull and enters brain tissue. Symptoms of a TBI can be mild, moderate, or severe, depending on the extent of the damage to the brain. A person with a mild TBI may remain conscious or may experience a loss of consciousness for a few seconds or minutes. Other symptoms of mild TBI include headache, confusion, lightheadedness, dizziness, blurred vision or tired eyes, ringing in the ears, bad taste in the mouth, fatigue or lethargy, a change in sleep patterns, behavioral or mood changes, and trouble with memory, concentration, attention, or thinking. A person with a moderate or severe TBI may show these same symptoms, but may also have a headache that gets worse or does not go away, repeated vomiting or nausea, convulsions or seizures, an inability to awaken from sleep, dilation of one or both pupils of the eyes, slurred speech, weakness or numbness in the extremities, loss of coordination, and increased confusion, restlessness, or agitation." 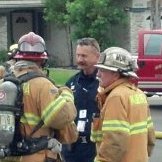 Press the play button above to listen right here on this webpage, or avail yourself of any of the following additional options...
listen, comment and share via all your favorite apps...
iTunes | Tunein | Player.FM | Podbay.FM | Stitcher | YouTube

For local support in your community, check out the National Alliance for the Mentally Ill's page on PTSD Resources: NAMI/PTSD

The National Institute of Neurological Disorders and Stroke website offers a wealth of information on TBI, prognosis, treatment and resources if you or someone you care for is in need of help regarding their TBI (http://www.ninds.nih.gov/disorders/tbi/tbi.htm)